HOW ARE PE IMPORTS MOVING INTO CHINA?

Despite a very critical international situation in terms of polymer supply due to the scarcity of supply, the difficulty in finding containers and due to the now asphyxiating prices, the Chinese giant, whose economy in 2020 has grown despite the pandemic , continues to break records also in the field of imports of plastic polymers.

In the analysis made by Pinar Polat, the Chinese PE market performed very well in terms of quantity, especially as regards LDPE.

Indeed, Chinese PE imports hit a new record in January and February, according to data from the General Customs Administration.

The customs office processed this data for the first two months of the year (2021) taking into account the distortions caused by the week-long Lunar New Year holiday, which this year was in mid-February.

China was the only major economy that experienced growth for 2020, managing to expand by 2.3%. The country's success in controlling COVID-19, stimulus measures and low money rates following the lifting of the blockade in April have increased its share of global trade and investment.

As a result, the country's cumulative PE imports hit a new record in the first two months of 2021, surpassing the volumes of 2019.

Total imports of PE in the January-February period recorded an annual increase of 8.3%, exceeding 2.5 million tons, the highest figure in ChemOrbis import statistics dating back to 2001 .

In fact, the slowdown in February was widely expected as commercial activities are normally reduced during the Chinese New Year celebrations.

Millions of workers return to their hometown to spend the holidays in the traditional way, however, due to the COVID-19 pandemic, this year's holiday travel has been less hectic.

On the other hand, cumulative imports of PE in the first two months of 2021 were still positive in an annual comparison. Among all PE products, Chinese imports of HDPE recorded a slight annual decline over this period, while imports of LDPE and LLDPE recorded increases.

Total volumes of HDPE in the January-February period recorded a slight decrease of 3.3% compared to the same period last year, reaching 1,097,065 tons.

During this period, Saudi Arabia was the leading supplier of HDPE in China with over 230,000 tons. Iran followed Saudi Arabia with 202,838 tons.

Total imports of LDPE in the January-February period, on the other hand, increased by about 24% on an annual basis, reaching 544,676 tons.

During this period, Saudi Arabia was China's top supplier with over 200,000 tons, while Singapore was the second largest supplier with 174,046 tons. 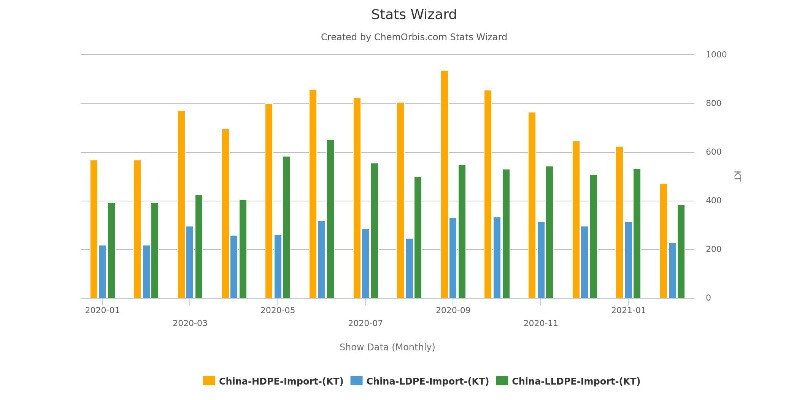