The year 2020, for the United States, was characterized by an important series of health and climate problems, linked to hurricanes, which suggested that the industry of the production and export of virgin polymers could suffer a sharp slowdown.

Furthermore, the internal political uncertainty and the persistent weakness of the world economy, as well as the always tense relations with China following the trade war between the two countries supported by the republican presidency, they did not favor the detente that is needed for exports.

But, as Esra Ersöz, the US production of PE, tells us, despite the many difficulties faced in the last quarter of 2020 due to the devastating hurricane season which caused several shutdowns on industrial plants, numerous requests for force majeure and the shortage of containers in the maritime sector, had an excellent year.

Regardless of all these production and logistics obstacles that occurred in the fourth quarter, exports from the United States for three PE products, namely LDPE, HDPE and LLDPE reached record levels in 2020, exceeding 10 million tons for the first time.

The United States has become an exporter of PE with great potential, as new production plants have been set up on the American territory that meet internal needs, also giving support to exports that have grown steadily and substantially in recent years, especially after 2017.

In 2020, the various issues related to climate and logistics made us think that the pace of growth could stop, but in reality, despite everything, the increase of exports was around 11%. Had it not been for all these problems, the annual increase in exports might have been greater.

Exports to China have doubled

The main destination for US PE exports was Mexico, closely followed by China.

More than 20% of the total exports of PE were made in these two countries. More interestingly, China's PE exports doubled in 2020 compared to 2019 in line with the end of the trade war.

Normal neighboring destinations in the Americas, including Mexico, Canada and Colombia, have seen a relatively moderate increase, while exports to Turkey and Malaysia have increased significantly. significant by over 20% as a result of more profitable netbacks.

Meanwhile, exports of PE to Belgium and Vietnam have dropped significantly, particularly in the latter. 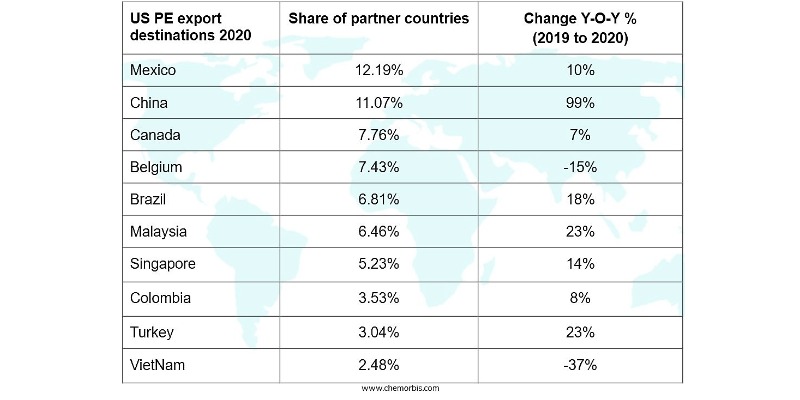